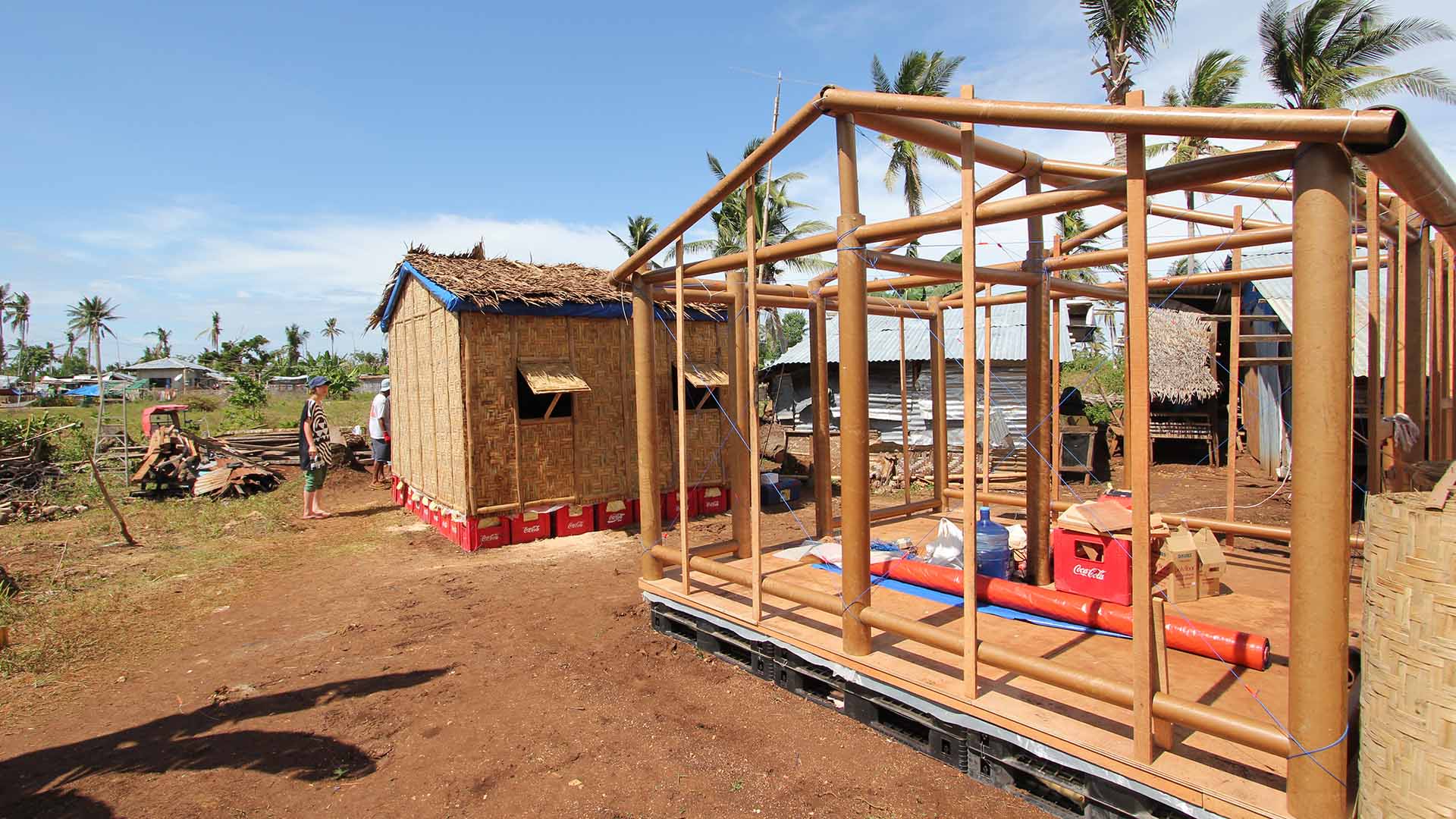 In 1994, Japanese architect Shigeru Ban knocked on the door of the United Nations High Commissioner for Refugees, to propose a change in the concept and design of ‘shelters’ and temporary buildings using his paper-tube technology. It was a small step, but one that led Ban to form his own NGO, Voluntary Architects’ Network (VAN) in 1995, to transform the notion of temporary disaster housing, and to become the first architect to be awarded the Pritzker Prize for his humanitarian work as well as for his architecture. In this interview, he talks to writer and curator Clare Farrow about his approach to materials and what drives him as an architect.

How did you first become involved in designing temporary housing following natural disasters?

It was natural for me to be involved, using my own energy, away from governments. After I became an architect I found that architecture is about privileged people, governments, developers, and I was disappointed; so I was looking for opportunities to create houses for ordinary people. In 1994, I saw a film about a refugee camp in Rwanda, and that was the beginning; I developed a [prototype] shelter [using paper tubing manufactured without waste]. In Haiti [in 2010] I built temporary shelters, and in Christchurch, New Zealand [following the 2011 earthquake], I built a paper church. But these disasters are manmade too. You cannot say these disasters are only natural.

There is poetry in your work, as well as pragmatism: you challenge our perceptions of what is temporary and permanent, weak and strong. Do you see the poetry too?

That was my education [under John Hejduk in New York], to see architecture like a poem: first the structure; then the minimum number of words, like a … There is no difference between the temporary and the permanent. Concrete can be temporary, if the building is just to make money; and a paper church can be permanent, if people love it. It is whether people love a building; this is what makes it permanent. I am interested in using weak materials. The durability of a building has nothing to do with the humble materials or the geometry; only the structure matters. A concrete building might be destroyed in a natural disaster, more than a paper one; so concrete can be weaker than paper. It is a philosophy, yes. These temporary buildings don’t have a short lifespan; they are not called temporary because of that, but because it’s easy to get permission; it’s a faster process. … But architecture is not just sculpture. Action and poetry: it is both.

Does your use of paper stem from Japanese traditions?

Paper is not a Japanese invention; like everything in Japan, it came from China. We are using the material as the structure; but traditionally it was just used as a screen.

How do your humanitarian activities differ to your other work with regards to your thinking and approach?

There are no differences in my thinking, only in terms of the conditions and budget. Otherwise, the way I design and understand is the same. I never think that I have to spend less time on the disaster relief projects. I try to give people dignity, and I ask them to help us to build together. If we keep giving to them, they are going to lose their dignity. Also, if they are involved in the building process, they can do the maintenance and build by themselves. I try to do different solutions for each project, also using some local materials. In disaster areas we see problems that we have never faced before, that must be solved by design.

For example, in the Philippines [following the typhoon in 2013] we used dried nipa [palm] and coconut leaves for the roof [of the ‘paper log house’]. Traditionally this was used to make a heavy roof of leaves, but I used plastic roofing, covered with dried leaves, to provide good ventilation and a blending with local traditions. The buildings are for the fishermen; so the leaves were not done by my students but by the victims. This is important.

Would you describe your Cardboard Cathedral in Christchurch, New Zealand (2013), as a turning point in your career?

The Japanese Pavilion for the Hanover Expo [2000] was more shocking and new –making a building out of paper tubes. But the importance of the Christchurch Cathedral is that it was the first time that a disaster relief project became monumental. I always talk about our profession’s intention to work for privileged people, but I also try to work for people who have lost their housing. I used to think of these as two completely separate activities, but the Cardboard Cathedral was the first time that the two came together.

You are also passionate about using timber as a structural material.

Yes, even in Japan only particular carpenters have this kind of craftsmanship; and unfortunately, after the War, because timber infrastructures can burn, the government didn’t encourage timber structures anymore, only concrete. But I use materials differently, because now we have much better machinery, we can make something different to the traditional ways of using wood.

Wood is a natural thing, so you have the direction of the fibre and the limitation of size. I enjoy turning these limitations into a solution. For me, wood and paper are more interesting because they easily perish. I like materials that age. Concrete will age too, but not like a natural material, which becomes part of the space and other elements of time. I don’t like a material where time is not involved in its life.

Were you surprised to win the 2014 Pritzker Prize?

Yes, because I was on the jury from 2006 to 2009 so I knew the criteria they discuss and the complicated selection process; also, the meaning of this award. So I didn’t think I was at the level to receive it. But they were trying to have a new attitude: instead of asking the great architects one by one, they were trying to choose somebody who has some messages. I took this as encouragement for my activities to continue.

Did it mark a shift of thinking in the architecture world?

When I was a student, everybody wanted to be a star architect, to do big buildings. But now there are so many students and young architects interested in what I am doing. Yes, it was the recognition that we have big problems with the environment and that many disasters are caused by climate change.

So, will you continue to create more housing solutions around the world?

Yes, I am trying to make a very simple factory for affordable housing, to provide employment in developing countries, but also to make a temporary housing system. We cannot just make one country successful and happy. If you’re going to be happy, you have to make another one happy.

This interview was conducted by Clare Farrow.