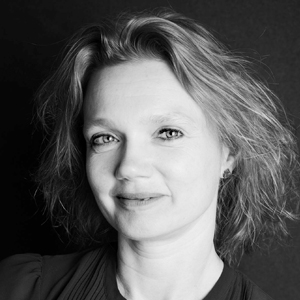 Indira van 't Klooster (Netherlands) is the founder and editor-in-chief of A10 new European architecture Cooperative (2016), after heading the A10 editorial team since 2012. Her books include Forty and Famous - 10 interviews with succesful young European architects (Amilcar Publishers, 2016) and Reactivate! Innovators of Dutch architecture (2013). She has been part of many architectural events and juries all over Europe, including the Hungarian Media Architecture Prize, the Young Italian Award, the Estonian Architect of the Year Award, the Dutch Maaskant Prize and the Scottish Doolan Prize. In 2017, she was a fellow at the Institute of Human Sciences in Vienna, researching utopian communities in Europe. Her bi-monthly talkshow "Architecture Now" is a live event that focuses on all sorts of topics in architecture worldwide. Since 2018 she is the director of the Dudok Architecture Center in The Netherlands. Cofounder of Spacetopia (www.spacetopia.nl) in 2019 together with Jeroen Junte, an ongoing research project connecting art, architecture, design and science. Output will be in print, live events, travel projects, exhibitions and podcasts.